There has been redundancy in the talks if there are ample of employment opportunities in the United States which has been catching up lately with the “Hold On” affirmation from Mr. President. But, there is one set-back which has struck chords of those passionate geeks and the half-bitten Apple lovers (including me), US did lose Jobs, may be not thousands in Number but one in the million Steve Jobs.

My first encounter with the Apple started in 2006, when my older sister wanted me to get her an Apple Ipod
(which was just launched then) from my South-Eastern trip to Singapore and Malaysia. And that was one adorable Black piece of 30GBs with amazing round-touch interface and white headphones. The standard Apple.
That was the first time, I took Apple Seriously and from then very seriously.

Just when I was looking for my first ever Laptop, I came across the elite one-piece aluminum coated MacBook Pro and other day it was home ( Thanks to Dad ). Since then I have been gaga over Apple products, and the discovered the man behind it. Steve Jobs had a life full of dramas and up-downs. The perfects leaders life.
He was one innovator which actually changed the world in respects to how it is essentially and effectively functioning today from the launch of first computer Lisa in 1984 to the well put GUI Interface in its first OS Macintosh. A man full of attitude and resources, just thought when everything was going right was asked to leave from his own built company over a tactless decision he couldn’t make. He then built PIXAR Animation Studios which has given some of the best animated films ever. Moreover, on the other side of his story which was grueling and adventurous, one which he accepted his daughter after a sense of responsibility, a biological child to his parents and the misadventures of pleasure in visiting India and chanting Hare Krsna in ISKCON. He was a man fully lived. And there are many such instances as such.

Now that, there are self-contradictions after the US Economy Outburst, the country is still well prepared and researched over 40 years from now and this leaves no clue when American economists Thomas Sargent and Christopher Sims wins the Nobel Prize in Economics, 2011 when their countries economists failed to predict the outburst which was an unplanned entanglement of their own misdeeds. Though, it’s still planning over the dues and expecting a female president in the next General Elections in 2012 ( Read Sarah Palin’s statement that ” There will be a female president in United States and I look forward for that day”). Will still the country’s shape change in time? The well-rounded state became an obtuse ellipse in 2008 and it’s still regaining the lost weight. Employment Opportunities are rising subsequently but the catch lies in the survival of the silent change. US does it between the lines and across the borders.

Coming back to a life of the Authentic, Attributed and an Audacious being, I will miss the man who created something which the world loved over times and it’s really sad to see the news on my Ipad which the man himself designed post which I got a call from a friend saying it over an Iphone. Apple is everywhere, and I truly love the organization over its ideals, innovation, intrinsic and a bottom-up approach for which Customer Satisfaction has been the first priority which they still top in consecutive years. All cheers go the one who is making the heaven beautiful and that young Steve of 56.

Remembering the words, which Steve Jobs gave over a commencement Speech at Stanford in 2005 ” You’ve got to find what you love. And that is as true for your work as it is for your lovers. Your work is going to fill a large part of your life, and the only way to be truly satisfied is to do what you believe is great work. And the only way to do great work is to love what you do…. Don’t settle. ”

US is Hungry right now, but not foolish.

To the man I always wanted to meet,
R.I.P Steve Jobs. 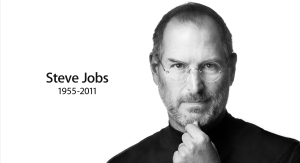